The lively Neapolitan musical scene has been described by Giuseppe Sigismondo (1739–1826), in the book recently published by SEDM. In these memoirs, I found the inspiration for the project dedicated to the Sei Duetti a Due Viole by Emanuele Barbella.
In his diary, Sigismondo recalled a funny argument that took place during a private musical gathering in Naples between the castrato Mazzanti and Barbella. 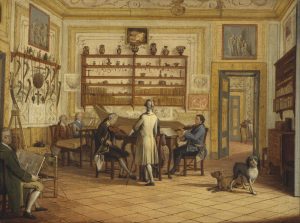 “Mazzanti was one of the pupils of Nucci who truly honoured the glory of his master. He played the harpsichord, violin and viola perfectly. He composed duos, trios, quartets, which he would rehearse with tw
o violins and a violoncello even when engaged here in Naples, playing the viola himself and delighting in unearthing his compositions with such professors. These were don Carlo Camarino on first violin, Emmanuele Barbella on second, and Domenico Francescone on the violoncello. They would convene at ten o’clock in the morning, drink some coffee and then play until one or two in the afternoon, followed by a good lunch for the entire company, both performers and audience, finishing with coffee and rosolio in winter and ice cream in summer. […]
During one of our salons I was the first to approach Mazzanti to let him peruse a cantata for the name-day of signora donna Rosa, wife of the famous cavalier Nolli, which was composed by the renowned poet, abbé Giuseppe Passeri and was to be sung by Mazzanti as well as set to music by me. Now, whilst we were discussing the subject, Barbella happened to arrive and, joining in our conversation, told us that the previous evening he had drafted a first allegro of a sonata for solo violin, and would be delighted for him to examine it. In saying this, he reached for the score inside his bag and presented it to him. After examining it for some time, Mazzanti returned it to him saying:
“Very good, signor Barbella, you have written a good piece of solfeggio.” Barbella was astounded, and replied:
“Don Ferdinà, are you mad? How is this sonata a piece of solfeggio?”
“A solfeggio indeed” replied Mazzanti; and Barbella:
“So you will sing it?” Mazzanti replied:
“Honestly! Is there anything unusual in this? Would you bet an ounce on it?”
“Go on” said Barbella. At this point Mazzanti rose and headed to the harpsichord. Barbella wanted to take his violin out, but Mazzanti said:
“No, no, signor Barbella. I am singing, I have no need for instruments.” And so he set the key and began the allegro con brio, arriving half way. Barbella’s complexion altered, and perturbed by anger, he took the score aw
ay from the musician to tear it apart. Mazzanti began to laugh and shouted:
“What are you doing, madman?”
He took the sheet back from him and added:
“What are you angry about? Have I by any chance mistreated or ridiculed your composition? No, sir!”
“So it can be said that Barbella has written a violin sonata that a singer can sing?”
“In fact this is its greatest quality.”
“You have no i
dea what you are talking about.”
“You should be glad that I have been able to sing it, this being excellent proof of its perfection; but you can be certain you won’t find another Mazzanti who will take on the challenge.”
As this point other members of our musical congress arrived and we discussed the performance. Mazzanti demonstrated his ability by finishing to sing the piece, and all were stunned and applauded him. However, the bet was never mentioned, and Mazzanti only demanded a copy of the composition from Barbella once he had finished it.”
Giuseppe Sigismondo, Apotheosis of Music in the Kingdom of Naples
edited by Claudio Bacciagaluppi, Giulia Giovani and Raffaele Mellace
Introduction by Rosa Cafiero
English translation by Beatrice Scaldini
Società Editrice di Musicologia (pp. 16-17)