Who was Jacque Vanderbouzzen?
Apparently, he never existed, and most probably this nickname was used by Felice Giardini (1716-1796) to publish a set of two trios, one in Stile Tedesco (two violins and bass), and one in Stile Italiano (violin, viola and cello).
He published this set in 1792, when he was about to leave London for good to establish himself in Russia. Giardini’s style at the time was old fashioned, he was struggling in keeping up with the brilliance of the younger performers as the Italian instrumental genre in London was being overshadowed by the arrival of the new music from the Austro-German school, and especially by Haydn, called by the same Giardini “the German dog”. 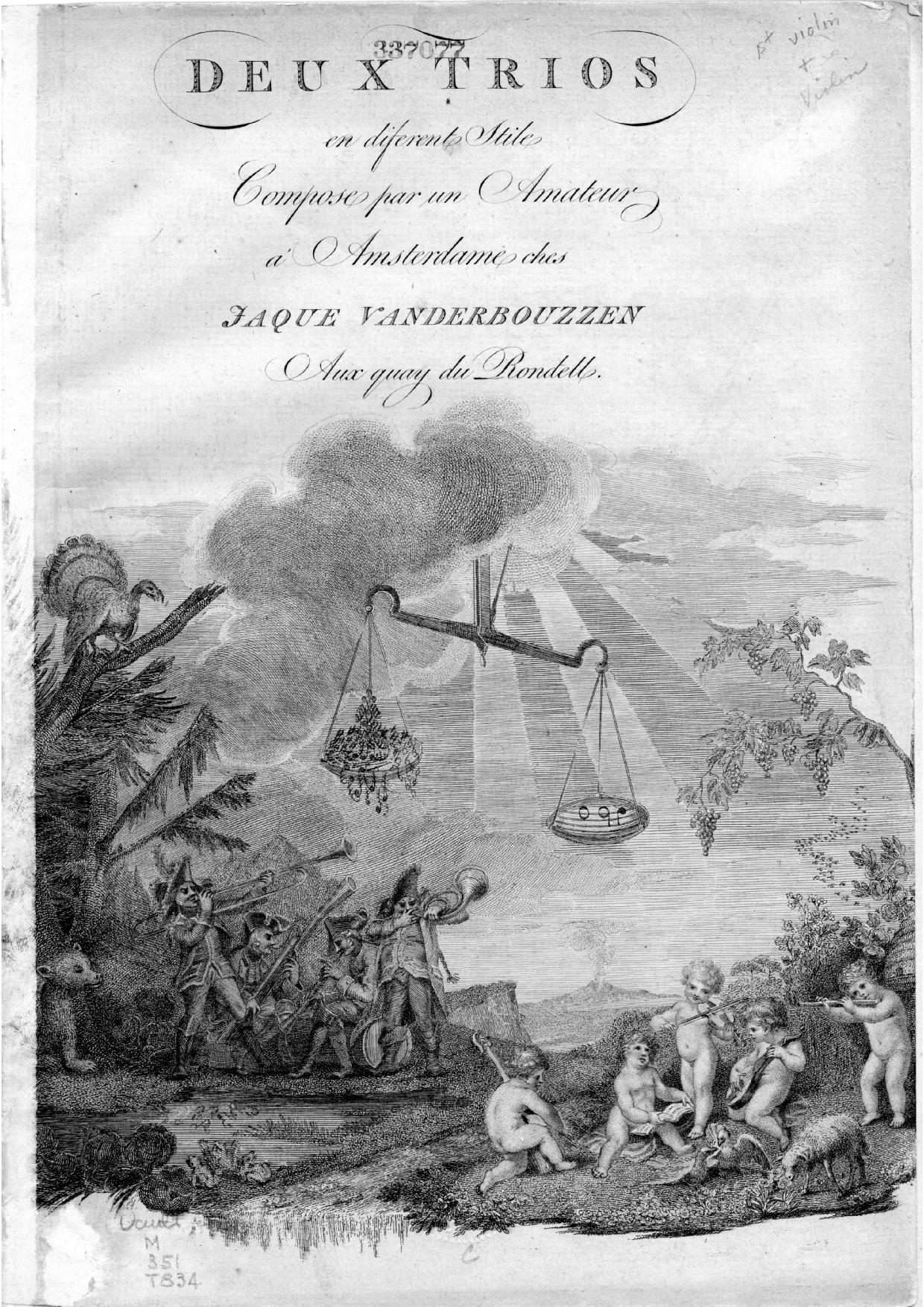 Here is an article from a London newspaper which describes the title page of this publication, which is in itself a manifesto of the desperate and somehow aggressive Giardini’s attempt to “take back control” and save the Italian tradition.

“MUSICAL CARICATURE, in private circulation. / This admirable piece of humour, which is now handing about in the Musical Circles, is a lampoon on the taste which the Germans have introduced, for trick, artifice, surprize, and difficulty, instead of symplicity and nature. The idea is exemplified by a contrast between the German and Italian style of composition. It is entitled, Deux Trios en different style, par un Amateur d’Amsterdamme. The one has all the perplexity of the Modern German; the other all the tenderness of the Italian. It is just possible for a dexterous Musician to play the one, and every body may play the other. But that which makes the whimsical satire most captivating, is the Vignette in the title. A balance and scales are held by the Deity. In the one scale are three simple notes, in the other a vast number of notes covered with flowers. The three simple notes weigh down the multitude, while, from the sky, Beams of Genius illuminate them, and below a Band of Loves accompany on the violin, the flute, &c. in a gay landscape, where doves coo, and lambkins gambol. The other scale is enveloped in gloom, while under it a band of German figures, with immense hats, are bursting their cheeks in blowing the bassoon, the horn, &c., a peacock is singing on a tree, a bear beats time, and there is a full chorus of frogs. We are not displeased to see this piece of humour; for it must be granted, that the Germans have run riot in their instrumentalities. We wish, however, that the Italians, with all their sacred regard to simplicity, would, now and then, merely for the sake of their characters, indulge in a little novelty. Their melodies would not be worse for being original; and it would very much heighten the charm if their airs occasionally were made unlike one another. We suspect the author of this piece of genuine satire to be that wicked wit Giardini; we have no information, however, on which to ground this conjecture.”